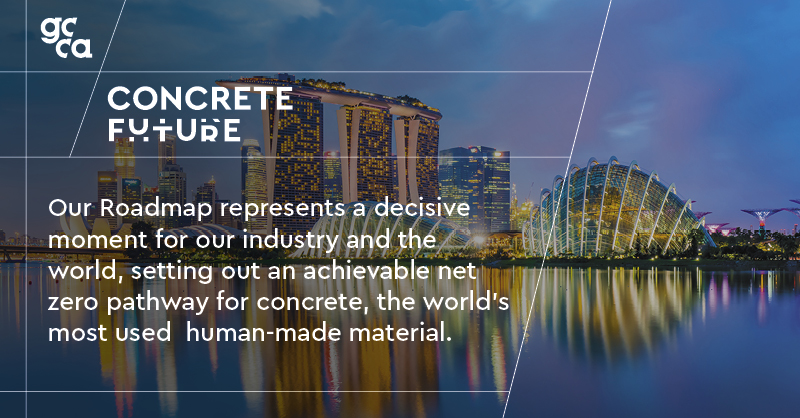 (London: 12 October 2021) Forty of the world’s leading cement and concrete manufacturers today join forces to accelerate the shift to greener concrete by pledging to cut CO2 emissions by a further 25% by 2030, marking a decisive step in the race to ‘Net Zero’ concrete by 2050.

The move by the members of the Global Cement and Concrete Association (GCCA) marks the biggest global commitment by an industry to net zero so far – bringing together companies from the Americas, Africa, Asia, including India and China, and Europe. It follows the September announcement during New York Climate Week that the GCCA has become the first global ‘heavy’ industry accelerator for the UN’s global Race to Zero. GCCA members account for 80% of the global cement industry volume outside of China, and also include several large Chinese manufacturers.

The GCCA has published a detailed roadmap which sets out the path that the industry will follow to fully decarbonize by 2050, a target aligned with the Paris Agreement to limit global warming to 1.5°C. The roadmap actions between now and 2030 will prevent almost 5 billion tonnes of carbon1 from entering the atmosphere compared to a business-as-usual scenario, equivalent to the CO2 emissions of almost 15 billion passenger flights from Paris to New York2.

Concrete is the most used human-made material on the planet with 14 billion cubic meters3 produced every year for use in everything from roads to bridges, tunnels to homes, and hydropower installations to flood defenses. Concrete is an essential element of construction, with no other material equaling its resilience, strength and wide availability. Production of cement, the key ingredient in concrete, accounts for around 7% of global CO2 emissions. The new 2030 commitment by the GCCA outlines a significant acceleration in the pace of industry decarbonization.

The roadmap to get there is built around a seven-point plan that relies on ambitious yet achievable actions to reduce the amount of CO2 intensive clinker in cement, significantly reduce fossil fuel use in manufacturing, and accelerate innovation in products, process efficiency and breakthrough technologies including carbon capture.

While the GCCA has outlined an ambitious programme for its members, it also calls on governments, designers and contractors to fully play their part by assembling the right public policies and investments to support the global scale transition of the industry. These include greater development of critical technologies such as carbon capture and storage, and reforms to public works procurement policy to encourage the use of low-carbon cement and concrete products. Public policy reforms and the promotion of low carbon products can make a big difference as public infrastructure accounts for almost 60% of all global cement and concrete demand.

GCCA member companies operate in almost every country of the world with a global cement and concrete market worth $440 billion4 annually and supporting a wider construction sector which represents 13% of global GDP5. The Association counts companies such as CEMEX, CNBM, CRH, HeidelbergCement, Holcim and Votorantim as members. The industry last year announced its ambition to fully decarbonize by 2050 and today is detailing its roadmap to achieve this goal.

“We fully support the Global Cement and Concrete Association (GCCA) commitment to net-zero,” said Michael McSweeney, President and CEO, Cement Association of Canada (CAC). “While Canada’s pathway to net-zero will be unique to our economy and policy environment, the destination and strategies will be closely aligned with those of our international peers. Through collaboration at home and abroad, we aim to position Canada’s cement and concrete industry as a global leader in low carbon technologies and the fight against climate change.”

The GCCA Global Net Zero Roadmap can be found here. The global launch coincides with the publication of a roadmap for the USA by the Portland Cement Association (PCA) for Carbon Neutrality6.

1 The roadmap put forward by GCCA will achieve 4.9 billion tonnes reductions of carbon between now and 2030 (GCCA Roadmap calculation).

2 ICAO calculates the carbon footprint of a flight between CDG and JFK as 333.6kg [Link] making the 5 billion tonne carbon saving equivalent to 14.9 billion passenger flights.

3 Equivalent to 32 billion tons of concrete

6 The GCCA partners with a number of national and regional cement and concrete associations across the world, many of which have already announced or are working on country based or globally regional net zero roadmaps, including the UK, Europe, LatAm and the USA.